How To Edit concert photos in Lightroom CC

Back in 2018 I got a gig as tour photographer for a band from Vienna I’m friends with called KFJ when they were the opening act for Billy Idol on his european summer tour. Shooting rock concerts for days in a row with up to 3000 images taken at every single show almost felt like I was attending a concert photography boot camp and so I quickly learned about the difficulties that come with it. The main thing that separates concert photography from every other photographic genre is that you have zero control over the lighting conditions. You’re not allowed to use a flash during showtime and the entire light show onstage is controlled by somebody else.

No matter how hard you try sooner or later you end up with a shot like I’m showing in the video – it captures a moment of great energy but the colors are a total mess. Everything is tainted in blue and magenta, there are no skin details and the shot is completely unusable in that state. However, if you have the RAW file there is still plenty you can do to fix that. At this point I really cannot emphasize enough on how important it is to shoot in RAW – if you haven’t already, start shooting RAW right now because there is no way a JPG could handle all the steps of processing.

When you have imported your picture into the catalog switch to Lightrooms develop module and check Remove Chromatic Aberration and Enable Profile Corrections in the Lens Corrections tab. Lightroom detects what lens you used in the shot and automatically applies a profile to remove the vignetting in the corners and so we have a clean start for our retouching process.

In this case we already have some clipping highlights in the face and in order recover more facial details I’m pulling down on the highlights and whites. I’m also bringing down the blacks just a little bit to darken the background leading the viewers attention more towards the singer. In terms of white balance magenta is our worst enemy in this photo so I’m moving the tint slider way more in the opposite direction towards the green and to get rid of the blue so I’m moving the temperature up to about 6K. As we’re dealing with a rock n roll shot here I feel like adding quite a bunch clarity to make it pop and give it that rough and edgy look. To compensate for that additional contrast, the last thing I’m doing is to lift the shadows to balance everything out.

To get rid of the disturbing tones I’m pulling down the saturation on the purple and magenta sliders in the HSL tab and I’m adding more luminance to magenta to brighten up the skin a little bit. In the Hue section we need to pay close attention to the blue, purple and magenta channels. I’m going for a more modern, teal-kind-of-blue here and in order to flatten the purple light shining on the face I’m also moving the purple slider more towards the blue. The magenta slider heavily affects the skin tones as you can see and so I’m setting it to a more natural red tone.

In the split toning tab we need to set the highlight and shadow color somewhere in the greens to neutralize the blue and red tones to get a more natural look on the skin. This is kind of a trial-and-error thing depending on what color cast you want to remove but playing around with the hue, saturation and balance sliders will get you a good-looking result. In this case I pulled the balance all the way to the left here because I don’t want any of the harsh blue tones shining through.

To make some final adjustments to the skin tones I’m opening the calibration tab where I desaturate the red tones just a tiny bit and also set them to a slightly more orange tone. In the last step I’m adding a bit of sharpening and I’m setting the noise reduction somewhere between 35-40 because the shot was taken at ISO 3200 and this helps to reduce the grain especially in darker areas. 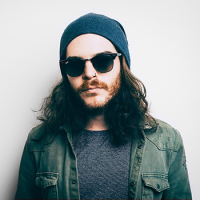 Patrick Berger Photographer and Filmmaker based in Wiener Neustadt, Austria. Love cameras, rock & roll and travelling. Working for "1000PS" and freelancing whenever I have time. To answer the question of faith, I'm a Canon guy.