Honestly, I wasn’t expecting anything special to happen in the summer of 2018. My only goal was to get through community service and start working again at my regular job in the media department of an austrian motorcycle magazine by the beginning of October. Being tight on money and spare time I couldn’t schedule any travels or focus on my passion for photography as much as I wished I could. The fact that I still had three months to serve carrying luggage at a cardiological rehab clinic made me unhappy and I was desperately looking for a way to break out bringing some action and thrill back into my life. That’s how I ended up going on tour with austrian rock band “Kaiser Franz Josef”.

Surprisingly, I received a message from my buddy Phil one day and my eyes popped when I read that Kaiser Franz Josef, a 2-times Amadeus Music Award winning band from our hometown Wiener Neustadt, were going on tour to support rock legend Billy Idol on numerous dates across Europe. Immediately I got into contact with Sham (guitar, vocals), Pete (bass) and Tom (drums) to offer them my services as photographer and the guys accepted right away. I was neither familiar with their music at that point nor did I care about making a single buck – personally it was all about being a part of something exciting, hitting the road and having the chance to shoot a couple of cool rock shows. Well, I’ve also been a fan of Billy Idol and being a guitar player myself Steve Stevens has always been one of my heroes. That fact might have added to the bill. 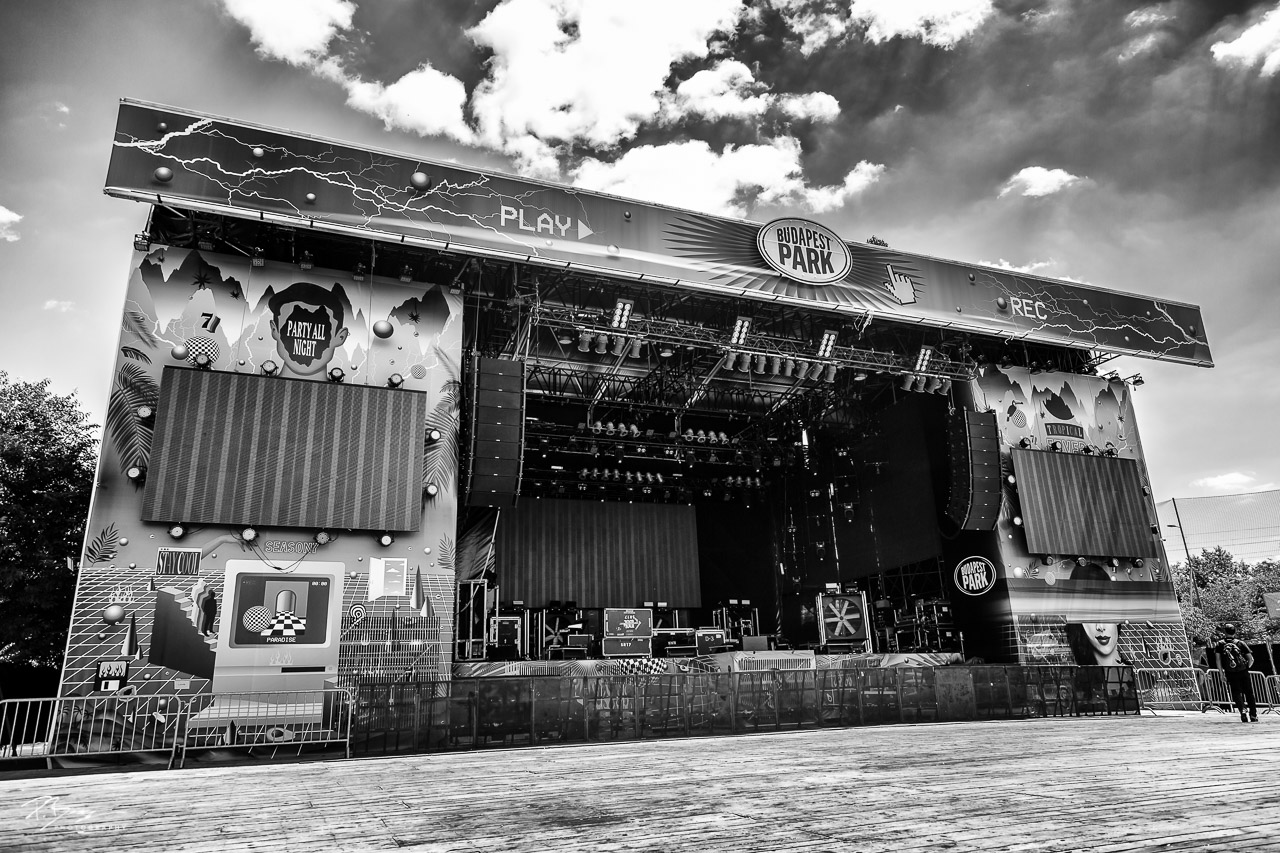 About a week later our crew came together for the first time. In addition to the three KFJ band members there were two sound engineers, Andy and Lukas, as well as my fellows Phil and Steve handling the merchandise and roadie duties. Eight crazy dudes with a mutual love for classic rock music stepping into a Ford van with a trailer and heading off to the first show in Budapest, Hungary. At this point the thrill already kicked in and I could feel the excitement rushing from toes to fingertips ready to press the shutter. Hell yeah, it’s finally happening – we’re going on tour!

Arrival at the venue

After driving east for approximately three hours we arrived in Budapest and parked our van in the backstage area of the location right next to two almost intimidating „Beat the Street“ nightliners belonging to Billy Idol, Steve Stevens and the rest of the Idol band. Those vehicles are the real deal if you want to travel the rockstar way and a brief look at them was enough to see pure astonishment in each and every of our crews faces.

I grabbed my backpack and checked my camera settings while the other guys unloaded all the remaining gear from the van. For those interested, I used a Canon EOS 5D MkIII with an EF 24-105mm/f4.0 throughout the entire day. Additionally I had my Nikon D800 and an AF-S 50mm/f1.4 with me as a backup but didn’t take a single shot with it. Afterwards we collectively had lunch followed by our first beer that day and started exploring the venue. Budapest Park is an open air location right in the center of the hungarian capitol and hosts many famous music artist over the period of one month in summer. Basically you can go there anytime in July to see a band or dance to DJ sets. The bars and backstage facilities are all built out of massive shipping containers and stacked up to make space for terraces and second levels for the audience to enjoy a show. It’s a simple yet extremely useful construction that resembles the vibe of a small arena to me. 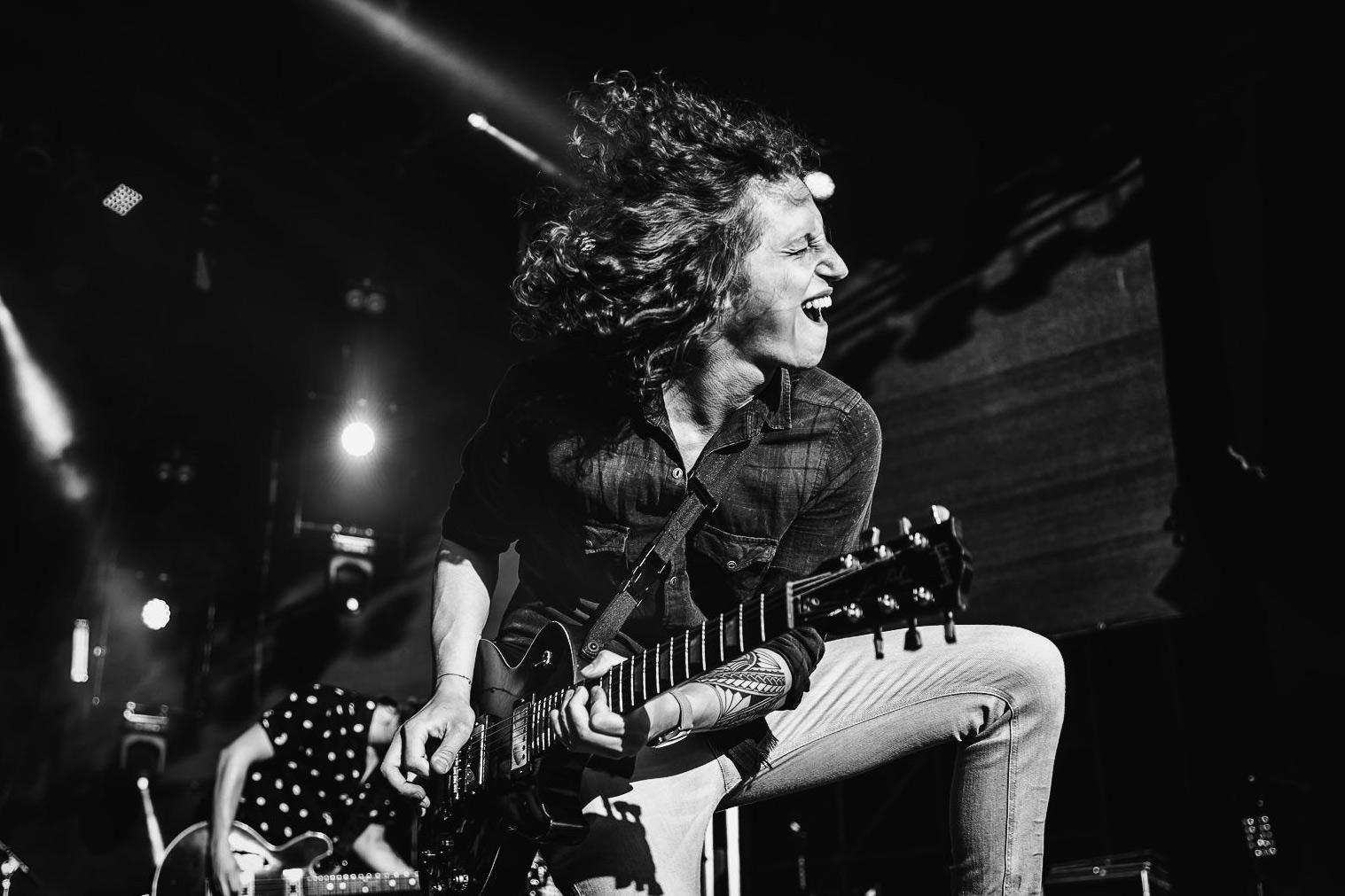 Getting ready for soundcheck

Time passed quite quickly in the afternoon and we had to wait for the Billy Idol techs to finish all their checks. In a show of that caliber nothing is left to chance. Everything from drums to guitars, from lightning to monitoring gets triple checked before the main act even arrives at the venue. Our crew had to be on standby and so we just made ourselves comfortable in the backstage area, grabbed food and drinks every now and then and just had fun all along the way. I used the time to take some behind the scenes snapshots of everybody and walked around the stage and photo pit on the lookout for good spots and interesting perspectives.

Finally, Billy Idol and his band arrived at the venue. Billy himself immediately went into his dressing room as he was just recovering from a serious flu. The other guys took it more easy and had a snack before they got onstage to check their instruments and monitoring. Everything seemed to work like a charme until Steve Stevens encountered a problem with his wireless guitar system. It took him and his guitar tech about 20 minutes to solve the issue and therefore the soundcheck for Kaiser Franz Josef was shortened by the exact same amount of time. Anyway, as opening act you’re not in the position to complain. Take it or leave it, easy is that. 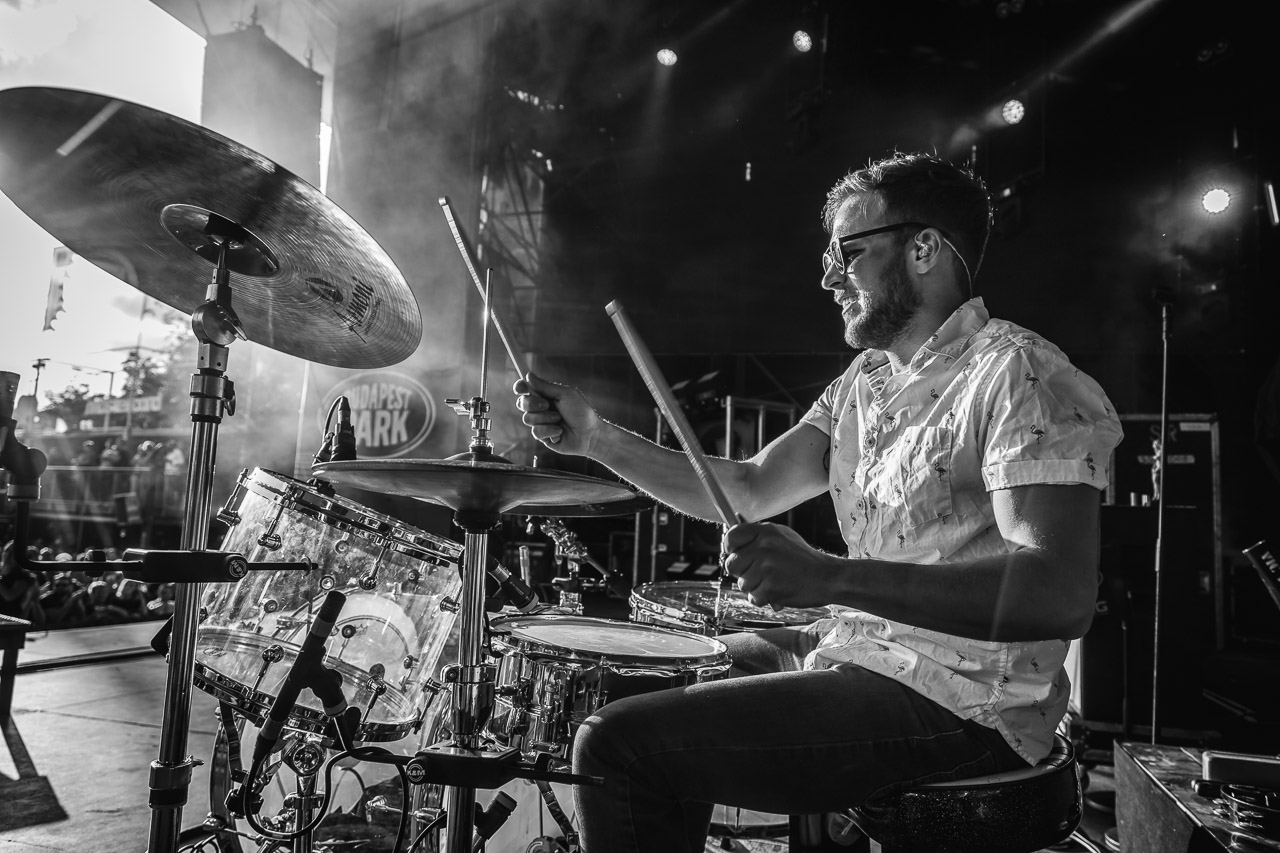 As soon as we got the go from the stage manager we lifted amps, guitars, effect boards and Toms drum set onstage. Our sound guys Andy and Lukas got everything wired up in the blink of an eye and Sham, Tom and Pete still had enough time to adjust everything accordingly to their individual needs. Their sound came out huge and I have never seen a band from my hometown on such an enormous stage. When they started playing their new song „Slaughterhouse“ during soundcheck that afternoon it literally blow me away and I turned into a fan of their raw, energetic music right in that moment.

Doors open was barely an hour ahead and so I went backstage to grab another drink and took a seat on the couch next to Paul Trudeau, keyboardist and guitarist in Billy Idol’s band. We introduced each other and casually started chatting about the tour schedule, the stifling heat in Budapest that day and travels in general. Paul is a tremendously gifted musician and a very humble and fun guy to hang around. It was great to exchange experiences and to see how down to earth this guy is.

Just a few minutes later Steve Stevens walked past the backstage area on his way to the dressing rooms. As I mentioned before I’m a huge fan of this guy since I picked up a guitar and I desperately wanted a picture with him. His work is absolutely insane. Beside all the hits he co-wrote with Billy Idol over the decades, he was the guitarist on Michael Jackson’s „Dirty Diana“, Vince Neil’s incredible solo album „Exposed“ and on top of that he won a Grammy for contributing his fretboard wizardry to the epic „Top Gun“ soundtrack.

Without hesitating I went over and asked if we can take a picture together. As he turned around he just said „Yeah, of course.“ I gave my phone to Pete who was sitting nearby and tried to keep my pokerface while posing next to this guitar legend. As we stood next to each other we somehow started talking about guitar gear and ended up chatting on that topic for about 10 minutes. In the end he even offered me his artist discount if I would ever buy one of his signature Friedman amps. „Just drop me a message on Facebook before you purchase“, he said. I’ll surely never forget that.

Mumbling sounds became more and more recognizable while we sat backstage and showtime for Kaiser Franz Josef was steadily approaching. I got up to see what was going on in front of stage and it blew my mind when I realized how many people got into the venue in just a matter of minutes. The place suddenly was packed with about 8000 people I guess. I took my position in the photo pit, constantly kept an eye on my watch and tried to calm myself down a bit. The show was about to start in less than 10 minutes.

As the intro sequence was playing and Sham, Pete and Tom went onstage the crowd was welcoming them with a loud, overwhelming cheer. I instantly got goosebumps and focused on what I was seeing through the viewfinder. Finally, shooting time! The boys kicked off their set which was about 30 minutes in total and I was constantly on the move trying to capture as much of their energy in my pictures as possible. As I was the bands official photographer I fortunately wasn’t restricted to the photo pit like many others. Instead, I could freely move to both side wings of the stage or even go up there taking a spot right next to the performers – a privilege I wanted to prove myself worthy of. I’m not a shy guy but going up there with my camera took me some confidence to be honest. Anyway, I wanted action and thrill and now I got it. In this situation I had to mind every step so I wouldn’t run into a monitor or trip over a cable while thousands of people were watching. 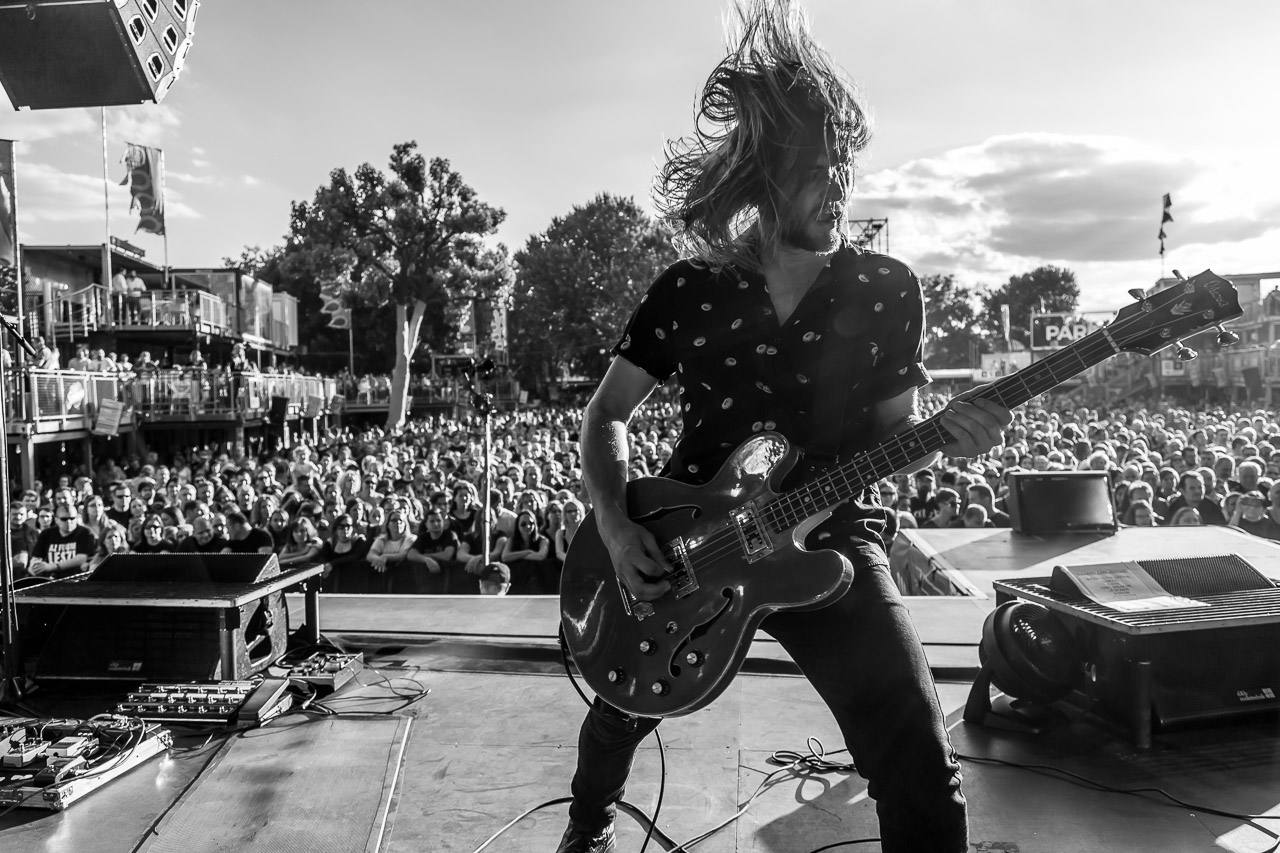 Time flew by incredibly fast and so far I was pretty happy with the shots I got but the most crucial moment was yet to come. As Kaiser Franz Josef were half way in the last song of their set I was already preparing for what I call the „celebration snap“. I wanted to capture the intense moment when the band comes together in the center of the stage after the final chord rang out, them facing an exultant crowd and taking a bow to a sold out venue. I set my lens to the widest focal length in order to capture as much as possible of the epic scenery and took about 30 exposures before we had to get off the stage. 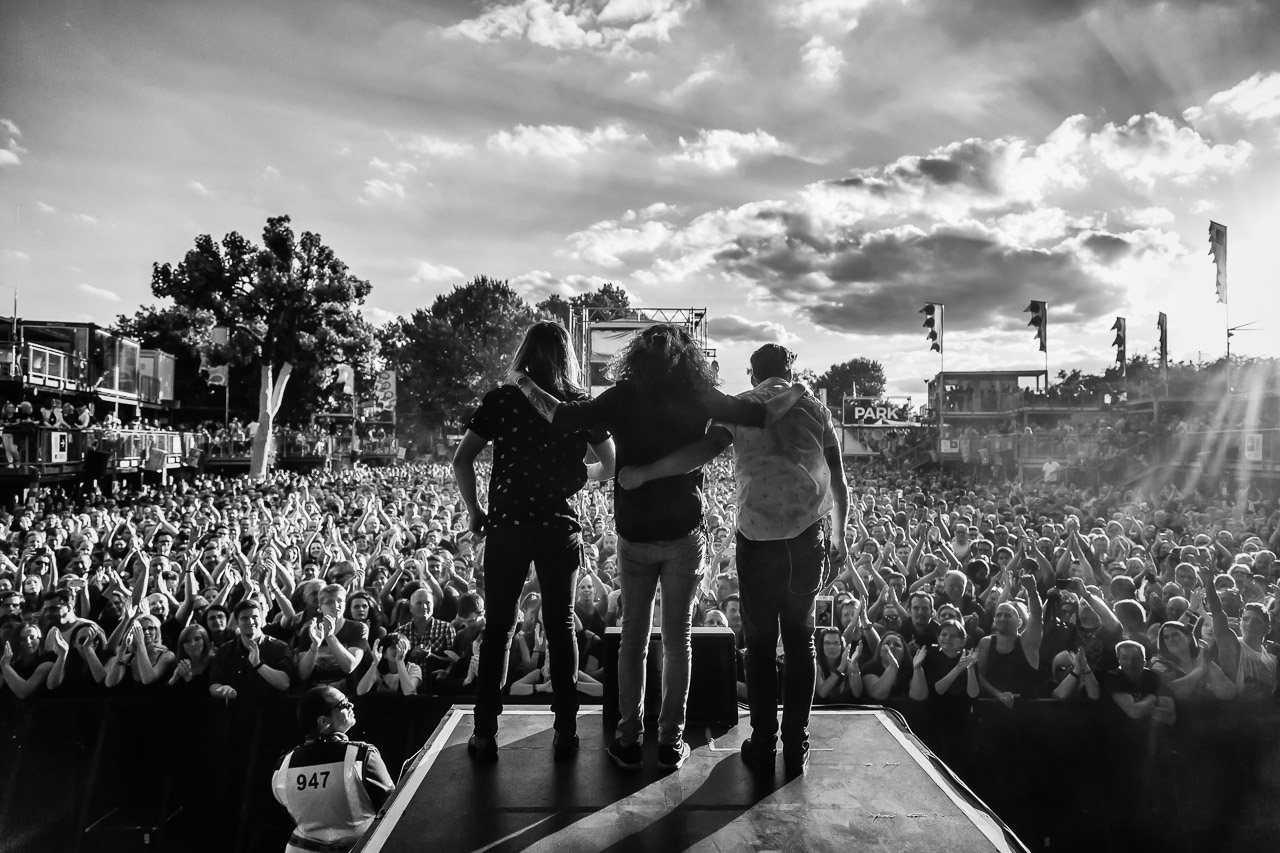 Everybody in our crew helped together to move all the gear belonging to Kaiser Franz Josef quickly off the stage and back into the Ford van. Our team worked together flawlessly and therefore we completed all after show duties in a couple of minutes. The stage was finally ready for the „Rebel Yell“ himself, Mr. Billy Idol. Our whole crew was totally relaxed by now, we got a couple of drinks and watched an amazing performance from the left side wing of the stage. We didn’t have to wait in lines for food or struggle for a good spot in the crowd to see the performance – I wish I had those conveniences at every concert I’m going to. It was a great experience, everybody had fun and Billy’s two hour show was over in a flash.

Right after the show, we left Budapest and drove back home to Wiener Neustadt. I finally got to bed at 03:00 a.m. which left me three hours of sleep before I had to get up and drive to the next Kaiser Franz Josef & Billy Idol show in Munich, Germany. Read more about the show in Germany in part 2 of my KFJ & Billy Idol tour diary.